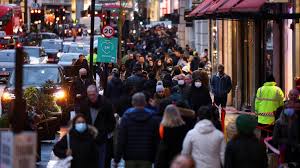 Millions more people in England are set to move into the toughest Covid restrictions after ministers warned that a new Covid strain of the virus may be linked to a rise in infections.London, most of Essex and parts of Hertfordshire will join tier three at 00:01 GMT on Wednesday.Health Secretary Matt Hancock said action was needed immediately to slow an “exponential” spike in cases.No 10 rejected suggestions it might now review Christmas guidelines.The announcement will move about 10.8 million people into tier three, with 61% of England’s population – or 34 million people – under the toughest restrictions from Wednesday.Under tier three – very high alert – rules pubs and restaurants must close, except for takeaway and delivery, and indoor entertainment venues such as theatres, bowling alleys and cinemas must remain shut.Schools can remain open, but the government has threatened legal action against Greenwich Council, in south-east London, after it wrote to head teachers asking all schools to move classes online amid a rise in Covid cases.The Department for Education said if the Labour-led council did not withdraw its advice by later this morning, the government would seek an injunction at the High Court to enforce its powers to keep schools open.It comes as a weekly review of Scotland’s Covid-19 levels system will be held later. All 32 local authority areas will have their situation assessed by politicians and public health officials.What has changed since the tiers came in?’New variant’ of coronavirus identified in EnglandLondon theatres ‘devastated’ to close againGreenwich Council ordered to keep schools openSpeaking at a Downing Street briefing on Monday evening, Mr Hancock said the virus was doubling in some areas of England roughly every seven days.It would only take a few doublings of cases for hospitals in the capital, Essex and Kent to be “overwhelmed”, he warned.The latest tier three areas include:Greater LondonThe south and west of Essex (Basildon, Brentwood, Harlow, Epping Forest, Castle Point, Rochford, Maldon, Braintree and Chelmsford, along with Thurrock and Southend-On-Sea borough councils)The south of Hertfordshire (Broxbourne, Hertsmere, Watford and the Three Rivers local authority)The new restrictions were met with anger from a number of sectors from the economy, with the hospitality industry warning the move would put thousands of jobs at risk.Mr Hancock acknowledged the measures would be a “blow” to people and businesses, but said “further action” could not be ruled out.Earlier, he revealed the new variant of Covid-19 had been identified by experts.He said an initial analysis suggested it was “growing faster than the existing variant”, affecting at least 60 different local authorities.He added the rise in transmission, as well as the new variant, was a “warning to us all that even after such a difficult year, we must stay vigilant”.Speaking on BBC Two’s Newsnight, former Tory minister Stephen Hammond, who represents Wimbledon, suggested there would now be a “rethinking” over whether it was appropriate for families to gather at Christmas.But Downing Street said the government “has no plans to review the Christmas guidelines”, which will allow more households to mix.New Covid strain: How worried should we be?A mutated virus sounds instinctively scary, but to mutate and change is what viruses do.Most of the time it is either a meaningless tweak or the virus alters itself in such a way that it gets worse at infecting us and the new variant just dies out.Occasionally it hits on a new winning formula.There is no clear-cut evidence the new variant is able to transmit more easily, cause more serious symptoms or render the vaccine useless.However, there are two reasons scientists are keeping a close eye on the one that has been detected in the south-east of England.Read more from James GallagherScientists have warned the easing of coronavirus restrictions over Christmas by all four UK nations will cause a spike in infections.David Nabarro, a World Health Organization special envoy working on Covid-19, said the price of such a relaxation “could well be very high” and urged people to think carefully about their plans.Prof Stephen Reicher, of the University of St Andrews, said: “Right now we are heading towards disaster.”Given high levels of infection across the country and the increasing levels in some areas, it is inevitable that if we all do choose to meet up over Christmas then we will pay the price in the new year.”But asked at the Downing Street briefing whether the government should rethink its Christmas plans, Mr Hancock urged people to be “extremely careful” about who they mix with in the run-up to Christmas if they are planning to see elderly relatives over the festive period.England’s chief medical officer, Prof Chris Whitty, said people should not meet at Christmas just because they can.A further 20,263 cases and a 232 deaths within 28 days of a positive test were recorded in the UK on Monday, according to government figures.What are tier three (very high) rules?You cannot mix indoors, in private gardens or in most outdoor venues, except with your household or bubbleYou can meet in a group of up to six in other outdoor spaces, such as parks, beaches or countrysideShops, gyms and personal care services (such as hairdressing) can stay openBars, pubs, cafes and restaurants must stay closed, except for delivery and takeawaySports fans cannot attend events in stadiumsIndoor entertainment venues – such as theatres, bowling alleys and cinemas – must stay closedPeople are advised not to travel to and from tier three areas#manchesterunited#HealthForAll#HealthBroadcastingService#GlobalHealth#Covid-19#coronavirus#Health#paulpogba#ukcoronavirus#HealthBroadcastingServiceInPublicHealthPartnership#formula1abudhabi#timespersonoftheyear#manchesterunitedvsmanchestercity#sevillavsrealmadrid#pgaeuropeantour#billbailey#extraterrestriallife#vaccine#davidllander#paolorossi#leicestercityfc#elitedangerous#chelseavsleedsunited#bobingen#euromillions#softbank#ncis#capitalpunishment#juventusfc#goldiehawn#worldhealthorganisation#saturdaynightlive#robertwilkie#losangeleslakers #arsenalvsburnley #michaelschumacher https://apple.news/AG5k1XsJqTxK8290jy18HeA