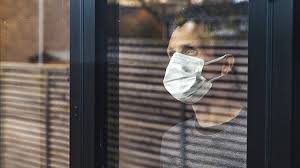 Some of the worst-hit areas saw the biggest improvements – but, despite this progress, cases remained relatively high across England. Health Secretary Matt Hancock said the data showed the country could not “take our foot off the pedal just yet”.The findings by Imperial College London were based on swabbing more than 100,000 people between 13-24 November.The React-1 study is highly respected and gives us the most up-to-date picture of Covid-19 in the country.Its researchers estimated the virus’s reproduction (R) rate had fallen to 0.88. That means on average every infection translated to less than one other new infection, so the epidemic is shrinking.Run alongside pollster Ipsos MORI, the Imperial study involved testing a random sample of people for coronavirus, whether or not they had symptoms. The results of these tests suggested a 30% fall in infections between the last study and the period of 13-24 November.Before that, cases were accelerating – doubling every nine days when the study last reported at the end of October.Now cases are coming down, but more slowly than they shot up – halving roughly every 37 days.■ PM calls for ‘unity’ from MPs on new Covid tiers■ UK R number below 1 for first time since August■ Has England’s lockdown worked?In the North West and North East, though – regions with some of the highest numbers of cases – infections fell by more than half.The findings suggest cases are now highest in the East Midlands and West Midlands. Lockdown came into force across England on 5 November but national data, based on people with symptoms, suggests there was a spike in cases in the week after.This was put down to pre-lockdown socialising, since it takes five days on average after catching the infection for it to be detectable by a test. Despite clear improvements, overall cases remain high. An estimated one in 100 people have coronavirus – double the rate in September when infections began to rise.The study also found certain groups had a higher chance of testing positive over this period:■ People of Asian ethnicity■ People living in the most deprived neighbourhoods ■ People living in the largest households It estimated that:■ Roughly 96 people in every 10,000 had coronavirus, down from 132 per 10,000 just before lockdown■ There were about 72,000 new infections a day, compared with 100,000 at the end of OctoberProf Paul Elliott, who leads the study, said the data offered “encouraging signs” for England’s epidemic.”These trends suggest that the tiered approach helped to curb infections in [the worst-affected areas] and that lockdown has added to this effect. But he said: “As we approach a challenging time of year, it’s even more vital that through our actions and behaviours we all play our part in helping to keep the virus at bay.”He told BBC Radio 4’s Today programme it was important to continue to pay attention to public-health messaging, as cases remained high.”It’s really important in the run-up to Christmas that we keep the virus under control,” he added. Prof Kevin McConway, a statistics professor at the Open University, urged caution over the figures.He said: “Things have started moving in the right direction again, but we’re by no means in the position we were at the end of the summer, or even the start of the summer. We can’t stop taking great care yet by any means.”The government suggested England’s new tier system, coming into force on Wednesday, would be “crucial” to keeping infections falling. The three-tier system is tougher than the similar one in place before 5 November, under which cases continued to rise. It will see regions placed in one of three tiers: medium, high and very high.In total, 99% of England will enter the highest two tiers, with tight restrictions on bars and restaurants and a ban on households mixing indoors. Only Cornwall, the Isle of Wight and Isles of Scilly will be in the lowest tier.Elsewhere in the UK, Northern Ireland has begun a two-week circuit-breaker lockdown, while in Scotland each area has been placed in one of five tiers.In Wales, First Minister Mark Drakeford said pubs, restaurants and bars will be subject to stricter restrictions – which are not yet finalised – in the run-up to Christmas. They will come into force from Friday, 4 December.These findings of the React-1 study are interim, meaning they still need to be reviewed. SOURCE: BBC NewsHealthForAll#HealthBroadcastingService#GlobalHealth#Covid-19#Health#HealthBroadcastingServiceInPublicHealthPartnership#victoriabakerharber#lorrainekelly#danieldubois#tcuhornedfrogs#studentdebt#gordonramsay