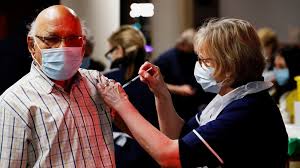 People in England aged 70 and over, as well as those listed as clinically extremely vulnerable, will begin receiving offers of a coronavirus vaccine this week. Prime Minister Boris Johnson said the move was a “significant milestone” in the nation’s vaccination programme. It comes as 10 new mass vaccination hubs open across England. Also from Monday, the UK is closing its travel corridors to protect against “as yet unidentified new strains” of Covid. The expansion of the vaccination programme to the third and fourth priority groups comes after the number of people to receive a first dose rose to 3.8 million across the UK – more than have tested positive (3.4 million) since the pandemic began. However, people in the top two groups – care home residents, those aged 80 and over and front-line healthcare workers – should still be prioritised for vaccinations, the Department for Health and Social Care said. A further 298,087 people received their first dose of the vaccine on Saturday, and Health Secretary Matt Hancock said half of all those aged 80 and over had received at least one vaccine dose so far. “We are now delivering the vaccine at a rate of 140 jabs a minute and I want to thank everyone involved in this national effort,” said Mr Johnson. “We have a long way to go and there will doubtless be challenges ahead – but by working together we are making huge progress in our fight against this virus.” Mr Hancock added: “This measure does not mean our focus on getting care homes, healthcare staff and those aged 80 and over vaccinated is wavering – it will remain our utmost priority over the coming weeks to reach the rest of these groups.” In a bid to meet the government’s target of offering a vaccine to all 15 million people in the top four priority groups by 15 February, 10 new vaccination hubs are opening in England from Monday, to go with the seven already in use. The new mass vaccination centres are in:

* The Lodge in Wickford, Essex

* The park-and-ride at Askham Bar, York

The seven hubs already in use are in: Etihad Tennis Centre, Manchester; Epsom Downs Racecourse, Surrey; Robertson House, Stevenage; Centre for Life, Newcastle; Ashton Gate Stadium, Bristol; Millennium Point, Birmingham; ExCel, London. While the prime minster said the UK is making “huge progress in our fight against the virus”, he also expressed concern about that progress being derailed by new – currently unknown – variants of the virus. As such, he announced on Friday that, from this week, all travel corridors are to be closed. That means that anyone arriving in the UK will have to quarantine. Under current rules, anyone flying into the country from overseas also has to show proof of a negative Covid test before setting off. The developments come after the UK recorded a further 671 deaths within 28 days of a positive Covid test, and another 38,598 positive tests. Daily totals for cases and deaths tend to fluctuate due to delays in reporting, but the seven-day average for deaths in the UK is currently 1,119; for cases, it is 46,231. Speaking to the BBC on Sunday, Sir Simon Stevens – chief executive of NHS England – said that some hospitals would open for vaccinations 24 hours a day, seven days a week on a trial basis in the next 10 days. He said England was on course to deliver another 1.5 million doses this week. Scotland has delivered a total of more than 224,000 first doses, Wales has given over 126,000 and Northern Ireland nearly 118,000 – although Scotland and Wales do not report figures at the weekend. Sir Simon added, however, that despite progress with vaccinations, the NHS had never been in a more precarious position, with 75% more Covid patients than at the April peak. Someone was being admitted to hospital with coronavirus every 30 seconds, Sir Simon said, and since Christmas patient numbers had risen by 15,000 – the equivalent of 30 full hospitals. Although there were promising signs infection rates were falling, he said they were still too high and rising in some areas and age groups, including the over-60s. Sir Simon also warned that although starting with the most vulnerable groups reduced the risk of deaths, a quarter of hospital patients with the virus were currently under 55 – and therefore not a priority unless they have a medical condition that puts them at additional risk. Asked about suggestions that some vaccination centres were having to throw away leftover doses, he said: “The guidance from the chief medical officer is crystal clear: every last drop of vaccine should be used.” He added many centres were finding they were able to get six doses out of a five-dose vial, and they should keep a reserve list of staff and high-risk patients who could be contacted to receive a vaccination at short notice. Dr Rosie Shire from the Doctors’ Association UK told the BBC that as well as sometimes getting six doses out of the five-dose Pfizer vials, I was also possible to get 11 or 12 doses out of 10-dose AstraZeneca vials. But she said the uncertain dose count made it harder to know how many last-minute appointments to book in order to use up the supply. Foreign Secretary Dominic Raab, meanwhile, said that the UK was making “good progress” in ensuring every adult was offered a vaccine by September and “if it can be done more swiftly, that’s a bonus”. Mr Raab said that he was not aware of any delays to supplies from manufacturers Pfizer and AstraZeneca, and that he was “confident we have the flexibility” to deliver enough doses. “It is an enormous challenge. We are meeting it,” he said. “But we take nothing for granted.” #manchesterunited#manchestercity#HealthForAll#HealthBroadcastingService#tampabaybuccaneers#Covid-19#arsenalfc#fcjuarez#miamidolphins#losangeleslakers#HealthBroadcastingServiceInPublicHealthPartnership#southafricanation#dallasmavericks#martinlambienairn#denverbroncos#gremiofootballportoalegrense#scottishchampion#washingtonfootballteam#vaccine#loganvanbeek#ohiostatebuckeye#sacramentokings#lasvegasraiders#brooklynnets#jamesnaismith#tottenhamhotspur#fcbayernmunich#australianmenscricket#janebirkin#burnleyvsmanchesterunited #packers#liverpoolfcandcrystalpalacefc#houstontexans#indianationalcricket #losangeleslakers #ghislainemaxwell#chelseafcwomen #emiliaclarke#losangelesclippers#horseracing#googleboxhttps://www.bbc.co.uk/news/uk-55698132