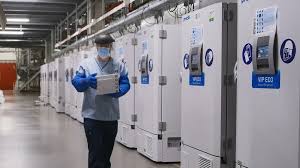 BBC News: Covid-19: Pfizer/BioNTech vaccine approved for use next week in UK