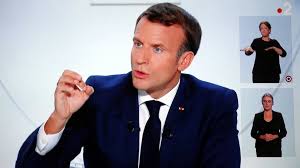 French President Emmanuel Macron has announced that people must stay indoors from 21:00 to 06:00 in Paris and eight other cities to control the rapid spread of coronavirus in the country.

The curfew will come into effect from Saturday and last for at least four weeks, Mr Macron said in a televised interview.

A state of emergency has also been declared.
A further 22,951 infections were confirmed on Wednesday.

Across Europe, governments are introducing new restrictions to battle a second wave of infections.
A partial lockdown comes into force in the Netherlands at 22:00 (20:00 GMT) and cafes and restaurants are closing.

Earlier on Wednesday, Spain’s north-eastern region of Catalonia said that bars and restaurants would close for 15 days from Thursday.

The Czech Republic has shut schools and bars. It has the highest rate of infection in Europe over the past two weeks, at 581.3 cases per 100,000 people

Across Europe, infection rates are rising, with Russia reporting a record 14,321 daily cases on Wednesday and a further 239 deaths.

What are the new measures in France?

President Macron said this wave of coronavirus was different to the outbreak in the spring because the virus had spread to all parts of France.

The night-time curfew will apply to the capital Paris and its suburbs as well as Marseille, Lyon, Lille, Aix-en-Provence, Rouen, Toulouse, Grenoble and Montpellier.

It will be applied for four weeks to begin with and Mr Macron’s government will seek to extend it to six.

The measures will stop people visiting restaurants and private homes during the evening and night-time, Mr Macron explained.

Residents will need a valid reason to be outside their homes during the hours of curfew, the president said. Essential trips will be permitted.
Schools will remain open and people will still be able to travel between regions during the day.

“We have to act. We need to put a brake on the spread of the virus,” Mr Macron said, adding that he understood that a curfew was a “hard” thing to ask people to do.