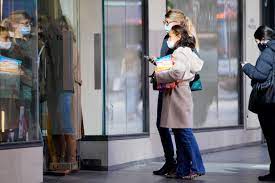 MELBOURNE (Reuters) -Australia’s Victoria state notched up a daily record of 847 locally acquired cases of COVID-19 and one death, government figures showed on Saturday as health officials warned the public to stay home ahead of a major national sporting final.

Authorities expect case numbers in the state to keep rising until mid November as it races to raise vaccination rates above the 70% double dose threshold, up from around 46% currently.

With the Australian rules football grand final, a major national sporting event, due to take place on Saturday evening, Chief Health Officer Brett Sutton warned fans to stay home to avoid putting “you, your friends and your households at risk.”

The match, between two Melbourne teams, would usually be played in the city but has been moved to coronavirus-free Western Australia. However, authorities are still worried fans in Melbourne could gather in households to watch the broadcast game, breaching lockdown rules.

Anti-vaccination protests that hit state capital Melbourne this week spilled into the suburbs on Friday, with police arresting more than 30 people in the city’s inner north.

Authorities are concerned the protests may fuel a worsening outbreak of the virus after one protester was admitted to hospital with COVID-19 late on Thursday.

“The violence is obviously horrible, and spitting at healthcare workers, being violent with police is obviously a devastatingly damaging way to deal with your anger,” said Sarah Whitelaw, state vice president of the Australian Medical Association.

It will be next week before the impact of cases associated with the protest can be seen, and hospitalisations will follow a few weeks later, adding pressure to the healthcare system, she told the Australian Broadcasting Corporation.

“The potential is very very real.”

Sixty people have died from the virus in the state this week, the highest weekly number since the pandemic began and more than the 58 deaths last week. New infections however show signs of stabilising at around 1,000 a day amid a state wide vaccination drive.

Around 85% of people over 16 years of age have had a first vaccination dose, while 58% of the population have had a double dose. Lockdown restrictions are set to ease when 70% and 80% of the adult population are fully vaccinated.