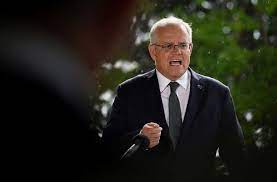 SYDNEY (Reuters) – Australia’s Prime Minister Scott Morrison said the nation’s political leaders want to move to a new phase of living with COVID-19 as though it were the flu, but would consult health experts.A day after meeting with the national cabinet of state and federal leaders, Morrison told reporters on Saturday morning they had discussed moving to “Phase D” of the national pandemic response plan.“Our airports are open again, international arrivals can come, there are waivers now on quarantine for people returning, so we are pretty much in Phase D,” he said.The leaders wanted to drop the isolation requirement for close contacts of COVID-19 cases and would seek further advice on this from an expert panel, he said.The isolation rule was “starving businesses of staff”, said Morrison, whose conservative government faces an election in May.“We believe we are pretty much in Phase D now, there are a few exceptions to that. Phase D, remember, means living with the virus like the flu,” he said.Western Australia and the Northern Territory would lag the eastern states by a month in dropping restrictions, he said.Health officials in New South Wales, the most populous state, this week flagged concern about a rise in the new BA.2 sub-variant of Omicron they said could bring a doubling of daily cases by the month’s end from the latest figures around 15,000.