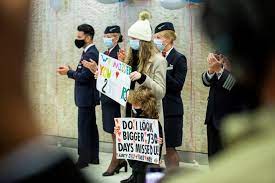 * Ban halted tourism from 33 countries since start of pandemi

c* Travellers must be vaccinated against COVID-19

NEW YORK/LONDON/TIJUANA, Nov 8 (Reuters) – Paul Campbell had waited nearly two years to reunite with his German fiancée at Boston’s Logan airport on Monday, the day the United States eased travel restrictions imposed on much of the world since the COVID-19 pandemic began.

“I’m just ecstatic that she’s here, I’m happy,” said Campbell, 63, a retired firefighter from Vermont who greeted her with a heart-shaped balloon. “Our relationship is still thriving even though we’ve been apart for two years.”

At John F. Kennedy International Airport in New York, a child held a sign reading, “Do I look bigger?” as he waited for the first British Airways flight from London’s Heathrow. “730 days missed u! Aunty Jill + Uncle Mark,” his sign said.

The travel ban, imposed since early 2020, barred access to non-U.S. citizens travelling from 33 countries – including China, India and much of Europe – and had also restricted overland entry from Mexico and Canada.

“Today America is open for business. That is our message to the world,” U.S. Commerce Secretary Gina Raimondo told Reuters in an interview at Chicago’s O’Hare airport.

For many arriving on packed flights from Europe or lining up at border crossings in Canada and Mexico, Monday’s was an emotional journey that ended in the arms of joyful relatives clutching flowers, balloons and homemade signs.

Months of pent-up demand triggered a major spike in bookings on Monday, with travellers only required to show official proof of vaccination and a recent, negative viral test. Travel bookings for the holiday season in the United States continue to rise rapidly, according to airlines and industry data.

No major issues at airports were flagged in an early morning call among airlines and U.S. government officials although authorities have warned about possible long queues and delays.

“It’s a major day of celebration,” Weiss said, adding that planes were “filling up nicely,” in what he called a significant tipping point for an industry brought to its knees by the pandemic.

Canadian travellers, particularly retirees headed to U.S. sun spots, flocked to the U.S. land border to drive across for the first time in 20 months, although testing requirements could dampen short-stay travel.

Janet Simoni, who lives in London, Ontario crossed the U.S.-Canada border just after midnight and drove to the house near Detroit where her husband lives.

“This whole half of my life has been missing for almost two years,” said Simoni.

In Mexico’s Ciudad Juarez, across from the Texan city of El Paso, a line of about 20 people formed early. They crossed and embraced family on the other side of the border, a Reuters witness said.

“We thought they were going to tell us again that they had decided not to open it,” said Lorena Hernandez, stroking her grown-up daughter’s hair and smiling broadly after they were reunited in El Paso. “I said, if they don’t reopen, I’m going to take a plane.”

Hundreds of migrants have arrived at Mexican border cities such as Tijuana in recent days, hoping the reset will make it easier to cross and seek U.S. asylum, despite warnings from advocates that the re-opening is for people who have papers.

Aysha Mathew struggled to hold back tears after her mother and sister arrived at New York’s JFK airport on Monday, fresh off the first British Airways flight from London’s Heathrow.

Mathew was holding her toddler, Adam, and pushing a stroller with her infant, Aaron, whom her mother and sister were meeting for the first time.

“It’s so surreal to finally be here and see them meet in person,” Mathew said. “I’m really, really happy.”

U.S. allies had heavily lobbied the Biden administration to lift the rules.

While cheering the resumption of the two-way transatlantic traffic, airline officials stressed that tourism and family trips alone will not be enough for carriers whose profits depend on filling the most expensive seats. L1N2RZ0LF

According to U.S. Travel, declines in international visitation since the start of the pandemic resulted in nearly $300 billion in lost export income and a loss of more than one million U.S. jobs.