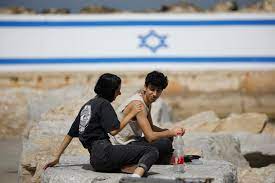 Israelis went about barefaced on Sunday after the order to wear masks outdoors was rescinded in another step towards relative normality thanks to the country’s mass-vaccination against COVID-19.

With about 81% of citizens or residents over 16 – the age group eligible for the Pfizer/BioNTech (PFE.N), (22UAy.DE) vaccine in Israel – having received both doses, contagions and hospitalisations are down sharply.

But entry by foreigners is still limited and non-immune Israelis who return from abroad must self-isolate, due to concern virus variants could challenge the vaccine. read more The Health Ministry said it had detected seven cases of a new Indian variant in Israel, whose potency was being assessed.

“We are leading the world right now when it comes to emerging from the coronavirus,” Prime Minister Benjamin Netanyahu told reporters. “(But) we have still not finished with the coronavirus. It can return.”

The police-enforced wearing of protective masks outdoors, ordered a year ago for non-exercise activities, was scrapped. But the Health Ministry said the requirement still applied for indoor public spaces and urged citizens to keep masks to hand.

“Being without a mask for the first time in a long time feels weird. But it’s a very good weird,” Amitai Hallgarten, 19, said while sunning himself at a park. “If I need to be masked indoors to finish with this – I’ll do everything I can.”

With Israeli kindergarteners, elementary and high school students already back in class, middle school pupils who had been kept at home or attended class sporadically returned to pre-pandemic schedules.

Teachers were instructed to continue ventilating classrooms and to maintain social distancing in lessons and breaks. Extra-curricular activities such as children’s theatres remain off-limits.

“This is still a non-vaccinated population (children under the age of 16) that we want to safeguard,” Health Ministry official Sharon Alroy-Preis told Israel’s Army Radio.

Israel counts East Jerusalem Palestinians among its 9.3 million population and has administered the vaccines there.

The 5.2 million Palestinians in the occupied West Bank and the Islamist Hamas-controlled Gaza Strip have been receiving limited supplies of vaccines provided by Israel, Russia, the United Arab Emirates, the global COVAX vaccine-sharing scheme and China.

AstraZeneca could have COVID-19 vaccine against variant by end-2021: Austrian newspaper
‘Dire need of beds, oxygen’: India’s capital under siege from COVID-19