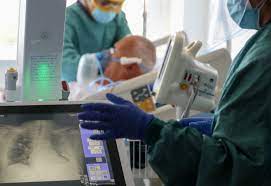 Sept 23 (Reuters) – Doctors in California are using cutting-edge lung scans to better understand the effects of ‘long COVID’ among patients who suffer severe symptoms months after their initial bout of infection.

The ‘four dimensions’ refers to the scan’s ability to measure the phases of breath as it passes into and out of the lungs.

“It takes a short video sequence. We use about 20 seconds worth of video sequence of the patient just breathing naturally,” said Fouras. “From that video sequence, we’re able to mathematically calculate the motion and then the airflow everywhere around the lungs.”

The imagery shows evidence of lung damage that cannot be seen on a CT scan or X-ray, said Dr. Ray Casciari, a pulmonologist at the St. Joseph Hospital in Orange, California, who serves as 4DMedical’s chief clinical adviser.

The hospital is one of several across the United States where the technology is being tested.

“The green area is an area of average ventilation and the red that you see out here is very poor, in fact, no ventilation,” said Casciari, showing a lung image of a COVID pneumonia patient with symptoms including shortness of breath.

The technology uses algorithms and mathematical models to convert sequences of X-ray images into quantitative data.

“They do some pretty ordinary imaging… and then we analyze those images,” Fouras said. “We take that X-ray video, layer our software on top of that and create the scans.”

The technology is most useful for long COVID patients who have lung damage, Fouras said.